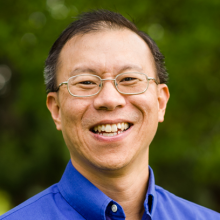 Joe Ho was born into an immigrant family in Cincinnati, Ohio, and was raised in the Cincinnati Chinese Church.  There he became a Reds fan, a Bengals fan, and a Christian, not necessarily in that order.  After earning a BS in biomedical engineering from Duke University and a brief stint in cardiac research, he has been on staff with InterVarsity since 1994.  Joe has and MA from Reformed Theological Seminary, with a thesis on James D.G. Dunn and the Social Function of the Law, which is much more interesting than it sounds.  He currently lives in Austin, TX with his wife, Traci. They have three children, two college-aged (Kaylee, Daniel) and one in high school (Christopher), as well as two cats.

Does InterVarsity Reach “Too Many Asians?”
By Joe Ho

“Hide the Asians!” That was a suggestion from a Chinese American student leader as our InterVarsity fellowship prepared for freshman outreach. For the past couple years, our student leadership core

Why I’d Use #BlackLivesMatter
By Joe Ho

I don’t tweet. Honestly, I don't know how. But if I did, I would use the controversial hashtag #Blacklivesmatter.It's hard to speak without being misunderstood. It's REALLY hard when using sound

What is your 'Jerusalem?’ You might be wrong.
By Joe Ho

Have you ever been told in an evangelism or missions talk to “begin in your Jerusalem?” What did the speaker mean by that? Chances are they were wrong.

Why Does Ethnic Identity Matter?
By Joe Ho

What is ethnic identity? Let’s break it down.In the Bible, the words traditionally translated nation (Heb goyim and Gk ethnos) refer to a community with a common ancestry and