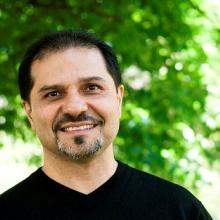 Orlando Crespo was actively involved in InterVarsity as an undergraduate and graduated from Colgate University in 1986 with a BA in Sociology and Anthropology. One month later he participated in a short-term missions trip to Honduras where his heart for missions and Latinos grew immensely.

In 1987, he moved to New York City, married his wife Maritza and began serving as an InterVarsity Campus Minister at City University of New York (CUNY).  Six years later, he was promoted to Area Director for CUNY and served in that capacity until 1999 when he was again promoted to National Director of InterVarsity Latino Fellowship. In 2003, Orlando authored Being Latino in Christ: Finding Wholeness in Your Ethnic Identity, which has sold over 17,000 copies and has helped thousands of Latinos become more confident in their service to Christ as leaders.

In addition to his ministry with InterVarsity, Orlando helped plant and serve as one of the founding pastors for New Life in The Bronx Church, the first English speaking CM&A church in the Bronx (1998). He was also a founding board member of The Family Empowerment Centers of Chicago, a Christian Community Development of the Mid-West District of CM&A in Chicago. Presently, he serves as a Board Member for the National Latino Evangelical Coalition.

Orlando is also a proud father to his two adult sons, Daniel and David.

Though racial strife and divisions have always been present in our country, events of this past year — the killings of Black men and women by police officers, the tragic shooting in Charleston, SC