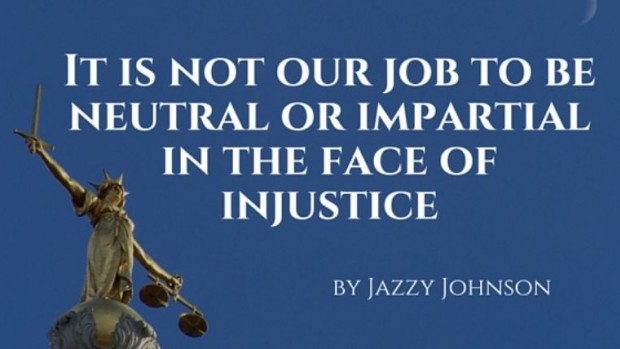 Over the past year, I have witnessed many of my Christian sisters and brothers seeking to be “impartial” or “neutral” as they watch the death and destruction of black bodies across our nation. I have answered many questions from friends, students and colleagues in the vein of:

Something about these questions causes me to do one of those side head cocks, raise my left hand with my index finger slightly extended and say with a crooked mouth response,

I do not think it is our role as believers to be “neutral” or “impartial”.

Yes, Jesus loves both the oppressed and the oppressor. And yes, we are called to seek and pursue radical forgiveness.

For example, the phrase “All Lives Matter!” while initially seeming neutral, impartial and inclusive is more often than not used to discredit, minimize and delegitimize the pain of Black people. Weaponized grace.

We, as people of faith, and faith leaders, in particular, have been placed in unique positions to be conduits of Jesus’ healing and loving power. We, as faith leaders, are handlers of narrative and story. We are mediators, facilitators and moderators of experience and truth, and this is a role we must take seriously, especially in the way we care for and love those of marginalized identities–people of color, LGBTQ folks, low income sisters and brothers, children, elderly, widow, foreigner…sounding familiar?

Are we on God’s side?

If our goal is not impartiality or neutrality, then what? Scripture can give us insight. Here's Joshua 5:13-15:

Now when Joshua was near Jericho, he looked up and saw a man standing in front of him with a drawn sword in his hand. Joshua went up to him and asked, “Are you for us or for our enemies?” “Neither,” he replied, “but as commander of the army of the Lord I have now come.” Then Joshua fell face down to the ground in reverence, and asked him, “What message does my Lord have for his servant?” The commander of the Lord’s army replied, “Take off your sandals, for the place where you are standing is holy.” And Joshua did so.

When Joshua asks “are you for us or for our enemies?”, the commander of the army of the Lord says to Joshua, “Neither.” The commander is on neither side, but that doesn’t make him neutral.

Must I remind us that he is the commander of the army of the Lord. Our Lord, who loves justice, who is wrathful in the face of injustice, oppression, idolatry, etc. The commander is on God’s side, and God’s side is the side of JUSTICE. That is not a people group, it is JUSTICE.

Must I also remind us that biblically this exchange directly precedes victory in Jericho for Joshua and the Israelites–to our human minds that would seem like he is on a side, Joshua’s side. But perhaps God was doing more than just “picking a side” – God was doing the work of balancing power and keeping his promise to his people, who he had delivered from oppression, to go with them and lead them.

An Alternative to Impartiality: Multipartiality

In my dialogue and social justice education training, I was taught the practice of multipartiality (resources found here).

The purpose of multipartiality is to equalize the structural and social forms of oppression that are present in an intergroup dialogue and share social power equally between group members so that a new reality can be created…This means that Intergroup dialogue facilitators: (a) Affirm contributions from all group members while challenging some contributions more than others depending on how they uphold the dominant norms and narrative in society (b) Are partial to identities and perspectives not represented among the dialogue participants.

As we engage our students on campus or congregants in the pews, let’s stop seeking to be impartial or neutral. By seeking to remain neutral, we often reinforce the oppression happening outside our walls and inside our Church body.

The dominant narrative and dominant ideals are already quite prevalent. As facilitators and leaders, we have to create space for counter narratives and marginalized experiences.

I’m reminded of Jesus in John 8, when the Pharisees bring in the woman who they caught in adultery to be stoned. Jesus’ response was to challenge the dominant narrative being presented of superiority, intolerance, condemnation and judgment and creates space for these Pharisees to understand the counternarrative, which is that of this persecuted woman.

He tells them, “Let any one of you who is without sin be the first to throw a stone at her.” He balanced the power structure in the situation.

He does the same thing with the woman who anoints him with the alabaster jar of perfume. Not only does Jesus challenge the Pharisees preconceptions here, but also the disciples rebuke of her for wasting expensive perfume they say could have been sold to give money to the poor. Jesus challenges these dominant ideals and narratives and brings forth the woman’s story and calls what she has done a “beautiful thing”. He balances the power structure in the situation.

This means, practically, as faith leaders, we must also be closer to the pain and WITH those on the margins. I say this as someone who needs to learn how to do this better. To consistently place myself in a position where I am WITH and not just talking ABOUT.

And here is the powerful thing, when we center on marginalized identities and bring them to the center, we honor those who are usually being oppressed AND those who are in power will experience the truth of Jesus through the eyes of those He holds so dear.

Jesus made it a point to create space for those on the margins and bring them to the center. Yet he also exalted the faith of the centurion, who had power.  He never sought to take a side but he also never sought to be neutral or impartial.

Why are we so concerned with being on both sides? We are on NEITHER SIDE! We are on the side of Lord, which is the side of Truth and justice. And there are tangible ways to put this into practice.