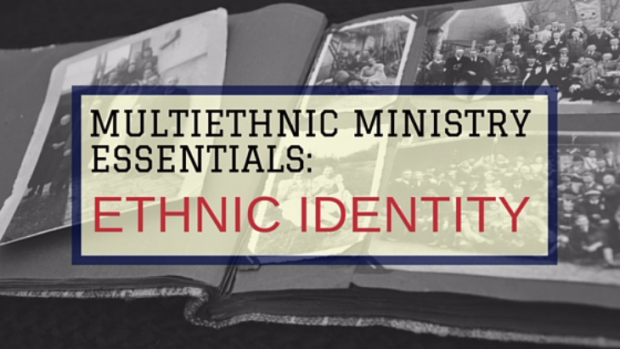 How do we pursue multiethnic ministry and become a community that more deeply reflects the unity and diversity of God’s people?

One of the best places to start is in the area of ethnic identity, the key to unlocking a deeper sense of self-awareness.

Discovering Our Identity with Buzzfeed, Myers-Briggs and 1 Corinthians

1 Corinthians 12 encourages a certain level of self-awareness and self-understanding. Paul’s talking about spiritual gifts. Some have gifts of healing, teaching, wisdom or helping. All of us have a particular identity, as hands and feet and eyes and ears. At InterVarsity Press, some of us are editors, some are marketers, and designers and accountants and in the warehouse and in IT and everything else. There is differentiation in our work.

We have tools for self-understanding. We take Myers-Briggs tests to understand our personalities; we have StrengthsFinders and the Enneagram. The most popular Buzzfeed articles are the ones like 17 Things About Introverts or 20 Signs You Grew Up in Wisconsin. Because they go to our identity! As embodied beings, located in community and culture and geography and personality. These things make us who we are. They shape us as parts of the body. And ethnicity and cultural background is a key part of that.

Paul is addressing the Corinthian church, which is composed of ethnic Jews and Gentiles together. Corinth was a cosmopolitan commercial center in Greece, a seaport with a diverse international population. The Corinthian Christians brought their cultural and ethnic backgrounds to their identity as the body of Christ.

Diversity is a creational good. God didn’t create just one kind of cat, or flower, or butterfly. He created thousands upon thousands of species. That biodiversity is good for the world. It would be bad if we only had one kind of tree. The complexity and diversity sustains and enriches all of life.

So the first dimension of knowing yourself is the work of ethnic identity formation. We are not generic, non-cultural beings. We trace our histories through generations of ethnic and cultural distinctives – food and fashion, temperaments and traditions, how we relate and think and feel.

We are not generic, non-cultural beings. We trace our histories through generations of ethnic and cultural distinctives – food and fashion, temperaments and traditions, how we relate and think and feel.

In high school, I applied for a journalism scholarship for ethnic minorities. I told a friend about it, and she paused, looked at me and said, “Al, I almost asked you what minority you are. I forgot you were Asian.” On one level, she knew me well enough that she didn’t think of me as an ethnic minority; she just thought of me as Al. But on another level, that kind of colorblindness ignored part of who I am. I have a particular ethnic identity as a second-generation Taiwanese American.

At the Calvin Festival of Faith & Writing in 2000, the Jewish author Chaim Potok talked about how he was shaped by the novels of Irish Catholic authors. Something about the particularity of their Irish Catholic experience spoke to him as an Orthodox Jew. And Potok’s books about being Jewish spoke to me as a Taiwanese American - fathers and sons, faith and culture. He quoted James Joyce, who said, “I always write about Dublin, because if I can get to the heart of Dublin I can get to the heart of all the cities of the world. In the particular is contained the universal.” That’s why we publish diverse authors with particular stories. In the particular are the universals.

So IVP publishes books like Being Latino in Christ, More Than Serving Tea, Living in Color or Being White. We’re shaped by our ethnic heritage, and we relate to God and each other in different ways as a result. Those of us from immigrant backgrounds resonate with scriptural themes of journey and pilgrimage; we see God’s care for the sojourner and foreigner. Those from African American backgrounds identify with themes of exodus and deliverance from slavery. Refugees and orphans understand what it means to be adopted into God’s family. Those from shame-based cultures see how Jesus took our shame upon himself and restored our honor.

God’s Image in Our Ethnic Identity

All of us were created in the image of God, and our ethnic and cultural backgrounds carry different aspects of that image. Sometimes our ethnic identities have distorted pictures of who God is or how we ought to live. My picture of God was shaped by Asian models of fatherhood and kinship and order, so God seemed distant; it was hard to think of God as relational and loving. But on the other hand, I also saw my mom’s commitment to Christian service, a strong sense of duty and sacrifice.

And I had a collective sense of identity beyond Western individualism. In Asian families, the family name comes first. My name in Chinese is Hsu Yihao. The last name takes priority. Then sometimes a generational name, and then your individual name. My mom’s side of the family is named Liao, and my mom’s name is Ming-Hwei. Her sisters share the same generational prefix – Ming-Hwa, Ming-Chen, Ming-Su, Ming-Hwun. It says that they are not just individuals; they’re part of a larger family. Other cultures have last names that connect with their parents; Scandivinavian names like Anderson, Larson. Son of Andrew, son of Lars. Or Hebrew names. Simon Bar-Jonah, son of Jonah. Russian, Slavic names like Petrovski, son of Peter.

This is the second in a 4-part series, "Multiethinc Ministry Essentials," where InterVarsity press editor Al Hsu reflects on 1 Corinthians 12 and its implciations for Multiethnic Ministry. You can read all the posts in the series here.