Adopted Twice: The Ethnic Journey of a Korean Adoptee 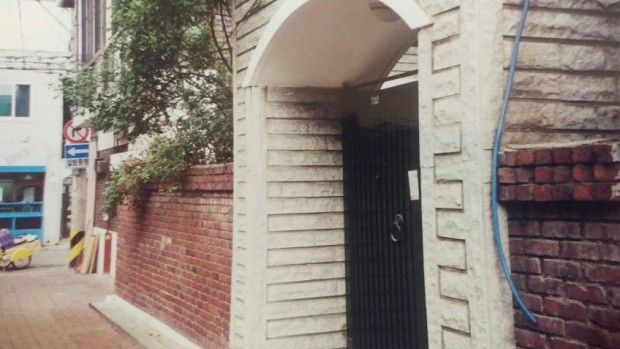 Sara was born in Seoul, South Korea in 1984.  Her mother placed her in a basket with a note asking to please take care of her daughter with info about her birth, and left her on the doorstep of an orphanage in Korea (pictured above).  Sara got her Korean name from the street that the orphanage was on. Korean speakers told her it was an ugly name and she grew up thinking her Korean name was ugly.

Sara had a wonderful experience growing up ... surrounded by lots of loving family and friends.  However, she also grew up wanting to be white.

When Sara was four months old, her adoptive parents were waiting to adopt her in New York. The orphanage fattened her up before placing her in the arms of white parents.  She had a wonderful experience growing up with them surrounded by lots of loving family and friends.  However, she also grew up wanting to be white.  She wanted double eye-lids.  She played soccer and all of her friends used Sun-In so she sprayed it liberally in her hair so it would be brown.  Her mom took her to Korean school when she was five years old.  The beginner class she was placed in was a class full of kids younger than her, a baby class.  She told herself and her mom that she couldn't be in class with babies and never went back.

High school was the first time Sara realized that Asians would want to hang out with her because she looked Asian.  She noticed differences though.  This was the first time she was accepted by Asians but was also simulataneously alienated.  She found that as much as she looked like them, she wasn't like them -- her parents weren't like theirs, her bookshelves weren't filled with SAT books, she didn't know how to use chopsticks, and she mistook jellyfish for noodles.

In college, Sara was determined to learn more about Asian culture.  She took an interest in anything Asian.  Bubble tea was the first thing that really caught her attention.  A group on campus was having a bubble tea bash -- a Christian group.  Sara became a Christian in her freshman year.  She realized that she could identify with Jesus, and more, Jesus could identify with her. Several things stood out to her. Jesus was in a home away from home.  His parents weren't genetically related to Him.  Jesus knew about rejection from His own people.  Sara experienced rejection by the Korean community, which was one of most trying times for her.  Adoption became a bad thing.  It was a double sting -- she was left behind in Korea by her birth mother and she was left behind by the Korean community in America.

Sara knew that Jesus was a bridge builder.  She was challenged by an exposition she heard about Moses.  He was left in a basket also, adopted into Pharoh's household, and raised Egyptian even though he was ethnically Jewish.  He was able minister to God's people in Egypt in a unique way because he knew the culture and language, and Sara realized that she was in a unique position to minister to other adoptees. The most profound thing she realized about Jesus was that she was not just alienated by her birth parents, but she was alienated from her original Father.  He loved her so much that would never reject her and He had travelled the globe with her South Korea to America.  She has been adopted twice, by her earthly parents and by the Father who adopted her into His kingdom family.

Sara ends by giving some statistics from the Adoption Institute: 72,000 adoptees will be entering college in the US in the next 5 years -- 2/3 of these will be women and China and Korea are in the top five countries where they were adopted. There is a great opportunity to minister to them.

Unfortunately, the video cuts out at the end but Sara's talk is definitely worth listening to. Listen to it here.

When in conversation with Sara recently about this post, she looked back at her notes and added this final piece:

It's been amazing to see the journey of renewal that God has had us on even since this video 3 years ago!

“I don't think the video captured the very end of the talk but I mentioned the challenge that I entered after the redemption component of college where I met my Korean American husband. Engagement was challenging to say the least as his parents had firm, traditionally held reasons as to why they opposed me joining their family (stemming from the fact that I was adopted). This reopened wounds that I hadn't known were there. As a result, the time in college was certainly preparation for what was to come post-college.  What I didn't know when I was giving this talk was that I was pregnant! With the arrival of our daughter God really healed our relationship with my husband's parents in a miraculous way. It's been amazing to see the journey of renewal that God has had us on even since this video 3 years ago!”