Racial Reconciliation is Not an Optional Seminar 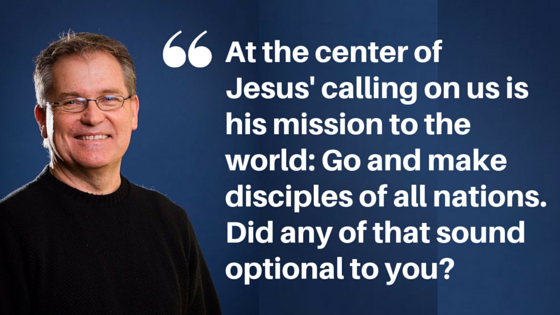 Is it only for Christians who feel particularly called?

Is it for only those in certain cultural, racial or geographic contexts?

At our recent Multiethnic Staff Conference, New England Regional Director Chris Nichols gave a stirring and convicting talk on the integration of Racial Reconciliation and our mission on campus and offered strong responses to some those questions.

The entire 35-minute talk is worth watching, but here is a collection of powerful and memorable quotes from Chris’ message:

On the Great Commission command to reach people who are different than us:

At the center of his lordship calling on us is his mission to the world: Go and make disciples of all nations. Did any of that sound optional to you? Under his authority we need to get up and go and engage other people in his name so they can be disciples of him. And that world, those other nations we’re called to engage, they are different than whatever world we grew up in. Whatever world we were raised in, we will be called out of.

On how we could miss the voice of God if we’re not prepared for it:

If we haven’t understood that we are being sent from home and the familiar, we will likely ignore God’s voice because we don’t expect him to speak that way. We’ll dismiss that command because it doesn’t sound like the Gospel to us. But the command to go is at the heart of the Gospel. And He does a mighty work when we listen and obey.

On what it means to be a witness to someone different from us:

In order to love and serve them in the kingdom, you have to understand their experience to speak into their lives. You have to live in their world in order to influence their choices. You have to learn to stand in their stead in order to learn what it means to love them. You have to give up your right to be comfortable in order to gain trust to preach the gospel. If we’re to make disciples in the name and manner of God’s kingdom we will be called to engage students across boundaries. Even when the world around us tells us we can’t have that influence, Jesus says we can.

On the potentially patronizing nature of diversity:

Our world loves diversity, the university values diversity, Intervarsity values diversity. Valuing diversity is good as a beginning point but it becomes patronizing over time. On our campuses too many students feel like they were recruited to be brochure models, valued for how they appear not necessarily because the university believes they are essential to the life of the school or the country. And we need to own, and I want to own, while that’s never our intent organizationally in IV it can feel that way if we see racial reconciliation as the activity we do when we get good at the fundamentals of our work.

On the importance of being displaced to see our own prejudices:

The more I have sat in places where I am not in the majority, the more I discovered how prejudice has been an inherent part of my cultural indoctrination. Its been built up in my life like a spiritual callous, which if its not treated, affects the way I think, talk make decision and engage with God and the world. But in the presence and in partnership with people different from myself, where I am not in charge and in the minority, those prejudices become apparent to me and God begins his work revealing them, exposing their ugliness, uncovering the lies I’ve been taught and slowly, steadily, relentlessly rubbing them down so that such prejudiced callouses don’t become normal in my life. 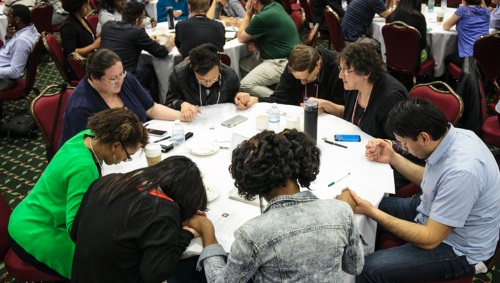 On the dangers of stereotyping other ethnicities and cultures in ministry:

We often only recognize gifts if they have been practiced in our communities, evangelists look one way. Preachers look and sound another, teachers are a certain type. Leaders come from one group. We see only what we’re used to seeing, and develop giftedness only in the ways we know how to develop them.

And while we may believe theoretically that all gifts are found in every culture among every racial group, unless we actively learn how to recognize spiritual gifts in different racial/ethnic groups in both genders and call them out in those we lead, that belief is only a theoretical, theological commitment. Unless we are very good at developing gifts in diverse communities of staff and students, we will box those we lead into ordered, stereotyped corners where they are safely corralled and controlled, but with little influence to move the mission forward. And their lack of effectiveness or influence will simply justify our spiritual blindness.

On what could happen when ministries like InterVarsity take seriously the Great Commission call to reach people who are different from us:

In light of that calling, we are going to be mothers and fathers of faith to students who do not look like us. Young white men on campus will look to black men on staff and see them as their fathers in hope, having been led by them to Jesus. Asian women who are embracing their leadership gifts will lead young men of all ethnicities to deep trust in the Lord and grow them into leaders themselves. Young white women will look to black female elders on campus and see Jesus and learn from them how to live out and into their faith. Asian men will call white students to believe and disciple them in the Gospel. White male IVCF staff will engage Black men with the Gospel and enable them to stand strong in their giftedness and stand with them for justice. On and on…unlikely pairing to unlikely pairing. These and any other combination you can think of will happen if we obey him. They are signs of the kingdom.

On rejecting the language of safe diversity:

If you’ve learned the language of safe diversity that requires no true engagement with anyone who doesn’t look like you, but makes you look accepting even as it keeps you in control, I call you to let go, to give up, to repent. That is the devil’s way of keeping the Gospel from going forward. Say yes to the voice of Jesus that calls you beyond the boundaries of your community of safety.

Chris Nichols is currently the Regional Director for InterVarsity Christian Fellowship of New England. In campus ministry for over 30 years, Chris has served on both coasts among university and college students. He received his B.A. in Biology from the University of the Pacific, M.A. European History, University of CA San Diego and has done post graduate studies in Theology at Regent College in Vancouver, BC.