Is Multiethnicity a Word? 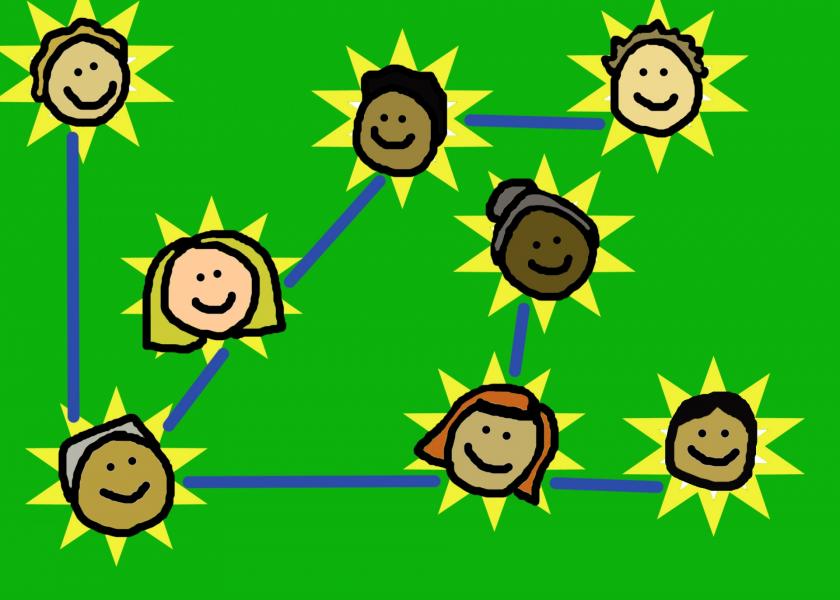 Well... not really. It is not in the dictionary (or not in any normal one). But it is a term we use in InterVarsity. Are we just in the habit of making up our own words? Are we just hoping that if we use it enough, it, like the word "ginormous" will eventually become accepted into standard lexica? It seems no one else uses this term - at least not with any regularity. But still, flying in the face of grammarians, we use the term (at least for now).

But why? The short answer is that it turns our belief and value for a multiethnic body of Christ into a word that we can set out as something to pursue.

But why multiethnic? That is a bigger question.

"Diversity" is too general and vague. "Multiculturalism" is a great value. However, as Christians, we do not believe that all elements of human cuture are God-honoring. While there are many great things about human expression and the diversity of cultures and subcultures, when used uncritically, we can ignore the reality that, at least according to Scripture, not all elements of human culture are to be celebrated. Moreover, talking generally of diversity or multiculturism doesn't shed light on the the powerful impact ethnicity and national origin play on cultural difference, identity, and social or economic inequality.

When it comes to division and histories of prejudice, oppression, or even violence, there may be great need for reconciliation among ethnic groups of the same racial group.

What about "Race?"  In the United States, our sad history of racial prejudice looms large and its fingerprints are everywhere.  In InterVarsity, we hope to continue to address issues of race and racial reconciliation with urgency and passion.  As long as the issue remains, race matters to us as Christians who long to see justice and peace on earth.  Still, as immigration and globalization increase awareness of diversity not captured by the term "race", we must also address similar issues at the level of ethnicity. Although "race" is a more prominent cateogry in the United States, emphasizing "ethnicity" allows us to highlight the ethnic diversity which can be easily overlooked, even in race discussions.

For example, while it is very useful in some contexts to use the term Latino or Asian-American, these racial terms lump a wide variety of ethnic groups under the same banner.  For our minority communities, this is often a very powerful tool.  After all, there is strength in numbers when dealing with the cultural majority or with other minority groups.

Yet it eschews the reality that within racial groups and their constinuent ethnic communities, there can be vast differences in culture, communication style, and family values which stem from ethnic differences.  What is more, when it comes to division and histories of prejudice, oppression, or even violence, there may be great need for reconciliation among ethnic groups of the same racial group.

The Importance of Ethnicity

As Christians, it is also important that our emphasis on "ethnicity" or "ethne" (ἔθνη) is rooted in the language of Scripture. Diversity exists in God's Creation from the beginning.  It is not a stretch to see the Creation narrative as a poetic celebration of the richness of life in its many forms.  Ethnic diversity develops as a result of people obeying God's command to "fill the earth." Languages develop, at least in one narrative, as God pushes the people of Babel out and into the rest of the world.

Yet as God propells humankind forward to spread out and become peoples of their own, His eye remains on all the peoples of the earth.  To the deeply flawed patriarch, Abraham, God declares that all the nations (In LXX: πάντα τὰ ἔθνη) will be blessed through his descendents - a promise which is echoed by the Apostle Paul (Gen 22:18, Gal 3:8).

Then at the other end of bookend of the Scriptural account, in John's apocalyptic vision, people of all tribes, nations (ethne), and tongues are represented (Rev 7:9). Repeatedly, in Paul's letters, Christians are reminded that when it comes to access and acceptance by God, ethnic distinctions are not a point of division (Gal 3, Eph 2, 4). Instead, all people are made one under Christ.  All have equal access and place in the Kingdom of God.

This does not mean, of course, that there are no longer ethnicity or ethnic distiction - nor does it mean all peoples start with the same benefits and privileges in life on this side of Heaven.  Prejudice, even unconscious, rears its ugly head both in and outside of the Church. This is well illustrated in Acts 6 where it becomes evident that the Jewish widows , who had  adopted the cultural practices and language of their Roman oppressors, were not being treated fairly in the distribution of food.  So, the early leaders commissioned Spirit filled people who were up to the task, to address this inequality and care for the needs of the poor.

Living in the Gap

There is dissonance here.  On the one hand the Gospel of Christ is manifestly just and available to all without prejudice, provided we are willing to follow Him.  On the other hand, we live in a world in which this same justice and access is twisted by patterns of willful sin or unwitting participation in unjust practices or systems.  In this gap between what is and what should be, the challenge for Christ followers is clear:

Multiethnicity is not a perfect term... if it is a word at all.  Maybe we will not use the word forever.  But we use it for now.  And this is what we mean:

Multiethnicity is a biblical value that reaches, includes and empowers people of every ethnicity and culture for God's purposes in the world (the Mission). Specifically, it compels us toward 1) the evangelization and discipleship of all ethnic communities, 2) the affirmation and prophetic challenge of all ethnic cultures, and 3) reconciliation and partnership among ethnic communities in the Gospel of Jesus Christ (the Vision).

Multiethnicity describes our commitment toward ethnic unity and diversity within Kingdom of God. It is our commitment to put the Gospel into practice in our fellowships and among our staff; to show, through our actions and words, that God is the God over all peoples. We hope to show, in our ministries and lives, that all peoples are invited to come to Christ together, confess our sins, and live in unity as we pursue Christ together.